Poor Santa. Today is IT for him to get it right. I can only imagine the stress!
In this Christmas advertisement from 1936, Santa takes times from his hectic delivery schedule to enjoy a calming smoke.

Oh, that a bit of vice would provide us the gift of peace on Earth and good will toward men.
Taking a hint from Santa, ’tis time to shut things down, gather ’round and enjoy the magic that is Christmas, sans the ciggie, of course.
Merriest holiday to all
xxea
Tie One On…an apron, of course!

Impersonating an icon like Elvis is a lot easier than impersonating an iconic illustration, which accounts for the army of badly done Santas that are everywhere. Because Santa is an illustration, we have no idea what he sounds like (were Santa a dead recording artist, at least the impersonators would all similarly deliver their Ho Ho Ho’s!), however due to the groundbreaking 1930’s Coke advertising campaign that featured a jolly fat man with a long white beard dressed in a fur trimmed red suit, we all know what Santa looks like

So at the least, a Santa impersonator should have blue eyes that twinkle, a plump belly that shakes like a bowl full of jell-o when he ho ho ho’s, and not be the least bit weird or scary, like the 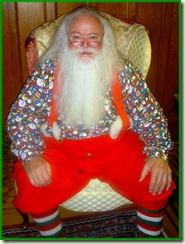 Santa I met at an open house hosted by my new friends, Pamela and John. As far as Santas go, this Santa was a ringer for the original Coca Cola Santa. He was so Santa-like, I bet he would win first place in a Santa competition. Seeing him was like seeing Elvis, before he left the building.

Do visit the Coca-Cola website for the history of the Santa illustration, and to learn the answers to burning questions like Is Santa’s coat red because that is the color for Coca-Cola? and Did Coca-Cola invent Santa Claus? Knowing the answers will make for the best holiday cocktail party chit chat.