I’m not alone in my love of a doughnut. According to one of my favorite little pamphlets, published in 1945 by the 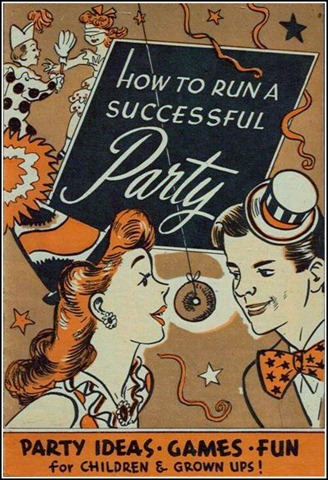 Doughnut Corp. of America, the doughnut is a symbol of fellowship, friendliness and a good time. 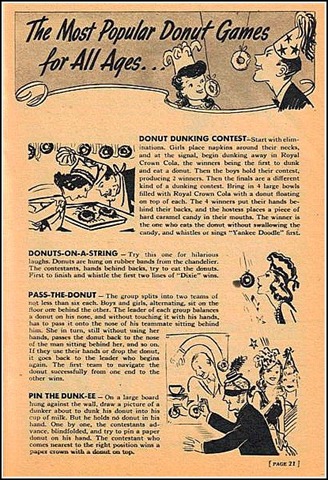 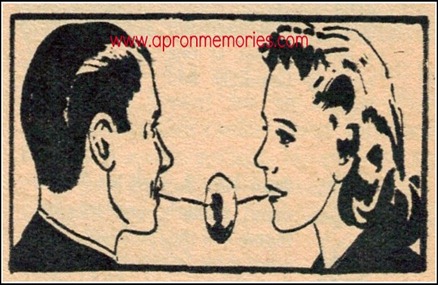 And if a planned event wasn’t enough reason to bring on the doughnuts,

there is page after page of creative ways to serve doughnuts. As a substitute for cereal, “Cut 2 donuts into bite-size pieces and serve in a bowl with fresh fruit and milk or cream. No sugar needed unless the fruit is very tart.” Or in lieu of bread, there was the Donut Sandwich with filling suggestions galore: Pimento cheese, cottage cheese and jam, peanut butter and steamed raisins, and a triple delight of cream cheese, pickle relish and chopped stuffed olives.

“The Salvation Army serves nearly 70 million meals to those in need each year so there’s no better way to highlight our work than by celebrating a great American food,” said Major George Hood, National Community Relations and Development Secretary for the Salvation Army.  The “So, while everyone enjoys a doughnut on Friday, we hope they’ll also think about giving back to those less fortunate.”

In honor of the 74th National Doughnut Day, Krispy Kreme is “…inviting doughnut fans to stop by a local Krispy Kreme shop for a complimentary doughnut.” The free doughnut offer is good for one doughnut of any variety per customer at participating U.S. Krispy Kreme retail shops. 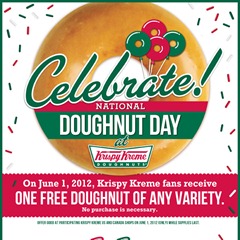 While any hour of the day is a good time for a doughnut, a doughnut dessert is special and worth the indulgence, especially when served in a mini format:
Doughnut Pudding
5 eggs
1/8 cup real maple syrup
2 teaspoon vanilla
3/4 cup half & half
3 T of butter
6-8 glazed doughnuts torn into smallish pieces (day-old is best)

Directions
1. Brush a 12 inch muffin tin with melted butter. Save the remaining butter
2. In a bowl whisk together eggs, maple syrup, remaining butter, vanilla and half & half.
3. Fold in chocolate chips, and doughnut pieces.
4. Fill each muffin cup with the mixture.
5. Cover the muffin tin with plastic wrap and refrigerate over night.
6. Bake at 375 for 30 minutes
Serve with a dollop of whipped cream.

Almost 80 years from its introduction, the doughnut is still a happy food that satisfies the spirit as well as the appetite. Not many foodstuffs can measure up to that, which is reason enough to celebrate doughnut’s day. Glazed for me. And you?