New: THE APRON BOOK : Podcast #1 – Author EllynAnne Geisel, foreword contributor Beth Livesay and producer/interviewer Tracy Wahl, formerly of npr, chat about their connection to aprons, the continuing relevance of aprons in today’s world, and connecting to the past while moving forward.

Enjoy listening to the podcast!

About The Apron Book:

Warm and inviting, but (like an apron) quite practical, The Apron Book is a celebration of a great American icon. Apron enthusiast Ellynanne Geisel, who curated the traveling exhibit, Apron Chronicles, returns us to hearth and home in this updated edition of the award-winning book. In this paperback edition, EllynAnne reflects on the grassroots movement of apron love in a new introduction, and a new foreword by the former editor of Apronology magazine expounds on EllynAnne’s mantra that aprons don’t hold us back; they take us back because the connection to the past is a strong one.

The Apron Book showcases full-color photos of new and vintage aprons from Geisel’s vast collection, patterns for four basic apron styles and myriad variations, recipes, tips on collecting and preserving vintage aprons, and heart-tugging stories from the traveling apron exhibit. The book also explores the history and heyday of aprons and looks at the various roles aprons still play when worn in the kitchen, around the house, by the backyard grill, on the job, or for a special occasion.

In 1971, I decided that Mr. Right was not riding the subways of New York City. My plan for discovering his whereabouts was to move as far west from NYC as possible, while still remaining in the United States, and begin journeying east. I relocated to Hawaii with my bicycle, a backpack and a lot of hope in my heart.

Within a day of landing, I was job hunting. Riding my bike along the busy streets of Waikiki, I stopped at the International Market Place, a shopping center of sorts.

Interviewing with the center’s management, my background in fashion illustration was interpreted as advertising expertise. Too polite to correct the misunderstanding, I was hired as a graphic artist to create the Market Place’s newspaper ads.

New to the locale and position, I was encouraged to wander the Market for inspiration.

Filled with individual specialty shops, hula demonstrations on the hour, abundant alcohol and vacationing tourists, the atmosphere was of a very happy place. The vibe of excitement and enticement reminded me of Bendel’s, which I attempted to interpret for an ad campaign.

At my dismissal meeting, it was noted that after just two weeks on the job, everyone was sad to see me go, and as a last hurrah, an evening at the famous Don Ho show was in order. No firing was ever so gloriously celebrated.

A year later, I stopped in to say goodbye to my friends in management. As a parting gift, I received a letter of recommendation. In Denver, I used that reference to land a job and by New Year’s Eve, had met Mr. Right.

It’s forty-two years since my quest for true love took me to Hawaii, and with New Year’s Eve on the cusp, champagne is on the brain, which reminds me of Don Ho singing Tiny Bubbles.

Sentimental of those days, I googled the International Market Place, and not a day too soon, for in a blink, the landmark will be no longer. By 8 p.m. on Dec. 31, “…every cart, shop, kiosk, dive bar, hole-in-the-wall eatery and fortune-teller’s booth at the Market Place must clear out and construction of the newest mall will begin.”

The loss of the Market Place is tragic because historic kitsch is irreplaceable. Just look at the efforts to reconstruct the Jersey Boardwalk from the damage of super storm Sandy and a devastating fire. Locally, our town guards against the extinction of a 1920 children’s amusement park because preserving the miniature rides and carousel for future generations to enjoy is paramount to the many municipality issues on the yearly ballot.

At sixty-five, I admit to a growing nostalgia for what once was, and especially this New Year’s Eve, remembering when a fake Polynesian village offered a lifetime of memories.

Yesterday was December 6, a common enough Friday with a personal attachment: the 14th anniversary of my father’s death. The gloomy winter weather made for a perfect day to stay in, bake yummies and reflect on a good man.

Today is December 7 – the anniversary of the attack on Pearl Harbor – and another reminder of Daddy, but as a young man gone to war.

He enlisted rather than be drafted and within months was at sea.

His travels around the world fueled a future love of geography and history, but of his actual military service, he was very quiet. Through old newspaper clippings, we learned the details of Daddy’s surviving the sinking of a destroyer on D Day and a second destroyer’s sinking off Okinawa.

I asked him once what it was like at war, and he answered I was scared…just like everyone else. Scared, until his shipmates’ lives were at stake.

A letter typed on the thinnest of onionskin and delivered at the war’s end, alluded to his bravery.

A formal letter of commendation spelled it out. And the mystery of the

Thank goodness for these bits of fragile news clippings and letters, because they are the tangible links to the character of a great guy, who never sought the limelight.

Daddy’s two anniversaries have me whoozy with nostalgia, and for whatever the reason, as I sit here writing this, I googled him, and whattaya know…he’s out there!    http://www.islandpacket.com/2011/01/17/1513344/tidal-wave-football-team-made.html

What’s so fabulous is Daddy is speaking about his days at Beaufort High School as a football player, when he and his friends were lauded as the town’s heroes, and still years from a war.

The piece was written in 2011 and Daddy’s interview from much earlier, before he was ill and then gone.

In a paperback about Beaufort, I found this photo and relevant caption:

A hero on the field and a hero in the field…that’s Bertram “Bookum” Levy.

I’ve been such a pain to my own sons about my need for their real, actual, handwritten notes, so down the road, I might have something real to hold and read, which emails are not. And then, through the simplest internet search, I am gifted my father’s long-silent voice.

What I’m just now accepting is that all forms of communication have value and while I may never see a grandchild write his/her name in cursive, I will treasure whatever their means of expression. And should they ever be curious about who we were “back in the day,” a google search will do it.

Bert was from a small southern town, where his family had been a presence since the late 1800s. He’d attended college for two years on a football scholarship, then enlisted in the Navy rather than be drafted.

Barbara was first-generation and her parents wanted her to have a better life than theirs. She went to a New York City college on a scholarship and made a promise to her parents she would not marry during the war.

The war ended, and Bert followed a job opportunity to New York City. Visiting a cousin at his office in a high rise, he met Barbara. She was a beautiful Yankee, and he was smitten. She’d never met a southern gentleman before, and she was quite taken. She gave him her phone number.

He called. She answered. They wasted no time.

He built a business. She raised a family of six children and worked alongside him. He fished. She ketched about cleaning his catch. She wanted to go to the opera. He wanted to take a nap. So different, how did it ever last? But when the goings got tough, they stayed tough together, until there was one, and then she was gone, too.

A wedding anniversary is my favorite celebration, and today we’ll be toasting my parents for showing us how it’s done.

Nostalgia at its best.

My very favorite essay is titled I Never Saw My Mother Do a Sit-up. Written in 2002, it was published two years later in Chicken Soup to Inspire a Woman’s Soul. And it is with considerable joy that I announce its publication as a Chicken Soup 101 BEST selection in a new Chicken Soup title, Like Mother, Like Daughter 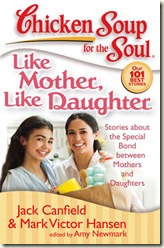 The timing of this announcement is not without purpose, as today, December 5 is the date of both my parents’ deaths, Daddy in 1999 and Mama in 2003. The saddest thing for me is that neither lived to 2006, the tipping point of my apron journey. Oh, how they would have delighted in it all.

And it is with delight that I share my favorite bit of storytelling http://www.apronmemories.com/index.php/press/

and my favorite photo of Mama and me 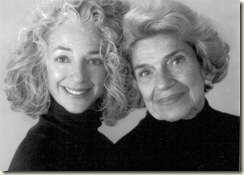 In memory, love and laughter,