I was recently browsing an antique mall, and in a nearby stall overheard a woman recite to her friend this proverb: Our grandmothers used it. Our mothers threw it away. And now we’re buying it back. Looking at my shopping tote a-bulge with vintage castoffs once belonging to someone else and soon to take up residence in my life, I shook my head at the truth in the old saying.

Of late, I’ve been utilizing the old metal containers as decorative storage for office and stationery supplies, business cards, black and white photos featuring aprons (of course!) and so on. Looking at the containers as I sit at the computer makes me happy, which is reason enough to buy one now and again.

Consistent with the saying is also the truism that we’re paying a lot more for that “old something” than our grandmothers’ paid for the same item. Just how much is too much is the question I always mull, but in the case of the red metal box, not for more than a blink. It called to me (we all know what that means), and at $8.00, I actually dubbed it the “b” word – a bargain.

According to CL’s antiques specialist, my red box is from the 1940s, “when designs became a bit fanciful…” The specialist noted that in today’s nostalgia-driven market, such red metal boxes are desirable and sell in the $20 range (!). Value increases with the presence of original dividers, household hints and handwritten recipes.

The box included a cache of recipes, each titled and typed out front and back on index cards. On one side of this card is the recipe for Chicken Chowder (step one: Cook a large fat hen in pressure cooker until tender.), and typed on the other – Saturday Night Special.

“Special” has long been the designation to the week’s final supper – a one-pot hodgepodge of leftovers.

From a 1949 Woman’s Day, a homemaker declares her love of smidgens of vegetables, plops of potatoes, spoonfuls of rice and cubed meats when reheated in a sauce made piquant with 3 tablespoons French’s mustard.

In 1942, Leftovers were considered so integral to cookbooks, the category was a separate chapter.

Leftover cereal? “When you have leftover cooked cereal, turn it into a glass, chill well, slice, saute to a golden brown as in Fried Mush, p. 156, and serve hot with butter, molasses, honey, syrup or jelly … or serve instead of potatoes with sausage, bacon, etc., for luncheon.” What mileage from

My red metal box may be of some monetary value, but to me, it’s true worth is in the recipe cards, which are like little windows into the lives of women of earlier generations…who were geniuses when it came to turning a little into something special.

There’s nothing like being invited to a Leftover Friday party when the invite is from a chef who insists we leave our own Thanksgiving leftovers at home. Good news, given the pumpkin soup and cranberry cream pie I’d made were deemed inedible, which reduced my family’s feast to fowl, potato, and vegetable, all of which we’d gobbled up. The sweet potato casserole was especially set upon. Gleaned from the November issue of Saveur – a magazine I subscribe to for its unique presentation of food through travel, photography, and storytelling, this ‘tater dish was the first recipe I’ve ever made from its pages. 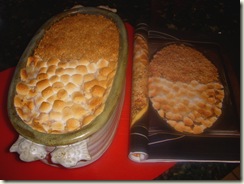 And that it turned out exactly as the photograph only enhanced my excitement. Of course, it was ridiculously easy, and halving the topping with one part marshmallow, the other part crushed salted cashews – yummy brilliance. I deemed it a gourmet success. 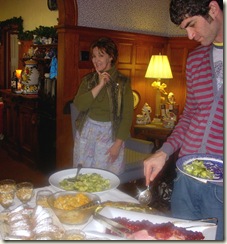 Ham was redressed with a warmed cherry chutney, baby cabbage reappeared in a casserole, sweet potatoes were tossed with hash browns and potato chips (!), cranberry sauce baked up into a coffee cake, and the fruit of the centerpiece chopped into a compote. I, who celebrate when the finished dish looks like the picture, cannot cook by invention. That’s talent.

Adding to the esprit of the gathering was the brunch beverage, a mixture of champagne and ruby grapefruit, our host John’s creation. 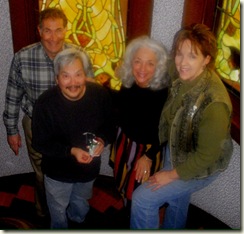 Toasting our new friendship, we handed the camera off so we could pose for a picture. It’s a tad fuzzy, but nonetheless a keepsake.

And adding to the jubilation was the presence of our sons. It’s been eight years since Noah and Gideon were last in Pueblo for Thanksgiving at the same time. 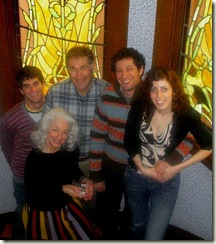