On June 22, 2002, I interviewed Julia Child at her home in Santa Barbara. After ten minutes of ringing the front doorbell, I timidly ventured round to the backyard to find her seated on a patio vibrant with plantings and comfy outdoor furniture. She greeted me with a hand wave and smile, gesturing that I should join her.
I came bearing gifts: an apron I’d sewn especially for Ms. Child and a bottle of champagne. Ms. Child unwrapped the apron – all ruffles and at least 10 sizes too small – held it up and in her distinctive voice said, “Oh, dearie, dainty doesn’t do in the kitchen.” Then she sweetly handed it back to me. I quickly produced hostess gift #2. Sliding the bottle from its bag, she rewarded this present with a nod and murmured notation that this gift she would not be returning.
Seated across from one another at a small cloth covered table, we talked while she ate a simple lunch of an unadorned hamburger patty and sipped a pint carton of milk through a little straw. We conversed about my apron journey, the storytellers whose apron memories I’d collected, and her personal apron story. In case my tape recorder failed to capture every syllable of her priceless recollection, I took down her words on a little notepad, utilizing a sort of frantic shorthand I hoped to God would later be decipherable.
Ms. Child told me that she hadn’t much experience in the kitchen nor had she ever worn an apron, until she met her husband. Newly married in 1949, they moved to France, where she tasted French food and knew right then she wanted to learn about French cooking. Following the tradition of the Cordon Bleu cooking school, she began wearing the chef-type blue denim apron with a towel draped over the waist ties. When Paul and I cooked together, he wore the same type apron, only folding the bib at the waist and hanging a towel from the apron pocket.
As soon as she began talking about her husband, sadness misted her face, and no longer was I sitting across from an icon; rather, I was in the presence of a woman who’d lost the love of her life. Paul and I always had breakfast and most of our meals with one another. After his retirement, we often ate at home in our kitchen. Upon his death in 1994, Paul and I had eaten together for almost fifty years. Fifty years.
Perhaps it was her sigh, or the controlled tidying of her cutlery, but in that instant she was my mother, also widowed and emotionally adrift without her prince charming. And as quickly, my nervousness left me and for the next hour, we conversed easily, like old friends.

With Ms. Child in the lead on a shiny blue walker with handle bars, hand brakes and a basket, we walked single file from the back patio through the house. Graciousness personified, she acquiesced to my request for a photo of her in the doorway of the kitchen – a miniature replica of the kitchen in the home she and her husband had lived in and now housed in the Smithsonian.

Tying on her apron, she perched on a stool and noted the wall-mounted microwave as more an annoyance than convenience. Kitchen chit chat with Julia Child. I was in heaven.

The digital recording of that interview has been in a fireproof box for a decade, so fearful am I of erasing it.

There’s over sixty minutes of conversation, revelation, poignant recollection, homey, personal advice and her words of wisdom, which I’ve integrated into my life. Julia Child was a teacher of more than cooking.

Since misplacing the key years ago, I’ve decided to just let that day stay as is: locked away from sight, but not of memory.

"I love creating each apron and I guarantee you will be delighted with your purchase."
~EllynAnne Geisel~

The fabric combinations for trims, waistbands, ties, borders and panels are individually selected by EllynAnne. All aprons are designed to cover and fit most. 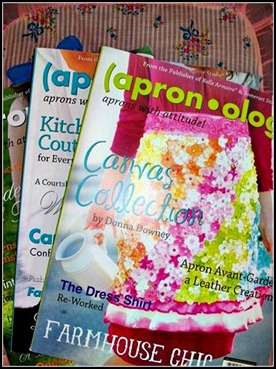 with the February 1st publication of the 4th edition 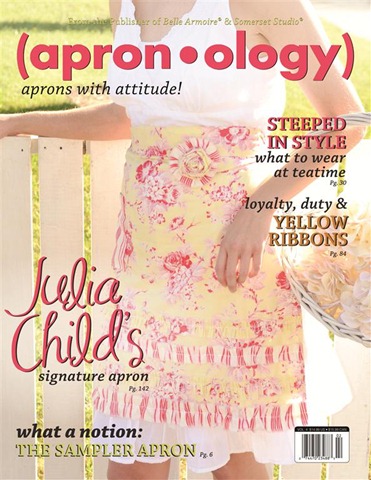 And so it is with immense pride of Beth and her accomplishment that I have the pleasure of offering a prepublication copy of apron·ology #4 to one very lucky winner.

Ohsosimple entry : just leave a comment at the end of this blog – including an email address so I might contact you if you’re selected the winner!

What a fitting way to wave bye bye to January, by tying one on…an apron, of course!, settling in with a cup of aromatic tea and transporting to “apron-land”  through the pages of apron·ology.

When my youngest child left for college, I knew my full-time, 24-year homemaking career was over. I’d always wanted to be a writer, but I knew nothing about writing professionally. So, in 2000, I attended the Santa Barbara Writer’s Conference, chosen because I’d heard SB was a really pretty place.

I returned to the conference in 2002 with an apron project I’d been working on. When I showed the bits and pieces of “Apron Memories” to Rise and Judy, friends from the earlier conference, they responded with enthusiasm and incredible generosity, opening a door for me that I never even imagined knocking on. Turned out my friends knew Julia Child, who, they opined, surely had an apron story to share.

And so it happened that in June, 2002, I interviewed Julia Child in her home and collected her apron memory. Interview completed, we walked from the back patio through the house – single file, with her in the lead on a shiny blue walker with handle bars, hand brakes, and a basket. Graciousness itself, she acquiesced to my request for a photo of her in the doorway of the kitchen. Perched on a stool, she pointed out the pegboard wall with its hooks holding assorted utilities as similar to the kitchen in the home she and her husband had lived in, and a wall-mounted microwave that was more an annoyance than convenience. Kitchen chit chat with Julia Child. I willed myself not to hyperventilate.

Almost to the entryway, Ms. Child stopped at a bookcase and opened a bottom drawer. Inside were stacks of folded denim aprons…”Custom made because of my height.” Removing one, she gave it to me to hold while she retrieved a white pen from another drawer. On the bib was embroidered JULIA CHILD and centered beneath THE WAY TO COOK. Taking a seat, she autographed the apron: Bon Appétit, Julia Child. I willed myself not to speak in tongue.

Kindness begets kindness, which is what I tell myself whenever I think about giving that apron to the Santa Barbara Arts Commission for its silent auction fundraising event. For had Julia Child not expressed such kindness in granting the interview, I wouldn’t have had the apron to donate at all.

Perhaps because the residents of Santa Barbara saw Julia Child out and about all the time, one of her aprons wasn’t thought of as very special. There was only one bidder – my friend Judy!

Arriving twenty minutes early for my interview with Julia Child, I bided time snapping pictures of her front door with my new camera. Satisfied the flash was working and the film advancing, I thought to read the manual on setting the self-timer, but dismissed any need-to-know, figuring whoever answers the bell will take the photo of us. Julia Child herself opened the door, and I closed it. No housekeeper in sight to later press into service.

Rather than wait until after the lecture and battle the hundreds wanting their own photo moment with Julia Child, I stayed outside the auditorium, hoping to see her before she entered the building. Curbside when the limousine pulled up, I rushed to Ms. Child’s side as she exited the car; I pointed to our pants and squealed Pink! Then I pointed to my friend, her camera at the ready.

I wanted to tell Ms. Child I’ve learned my lesson, and I’ll work hard to deserve your accolade. Instead, I took her arm (!!!), smiled to beat the band and said Cheese!

On June 22, 2002, I interviewed Julia Child about her apron memory.

How I came to be seated at a cloth covered patio table across from America’s most beloved cook is a whole other blog (tags: serendipity, friendship, largess).

The digital recording of that interview has been in a fireproof box for the past 7 years, so fearful have I been of taping over it. There’s over sixty minutes of conversation, revelation, poignant recollection, homey, personal advice and her words of wisdom, which I’ve integrated into my life…all fodder for a whole slew of blogs (tags: foreign, food, language, writing, cookbooks, celebrity, chef, teacher, hostess, wife, wisdom). Julia Child was a teacher of more than cooking.