When it came to opening a can and calling it cooking, my mother was the champ. And no meal lent itself more to Mama’s can cuisine than Thanksgiving. The green bean casserole? 1 can condensed mushroom soup + 1 can drained green beans + 1 can French fried onion rings = voila! Cranberry sauce? Straight from the can onto a lettuce lined plate, it bore the indentations of the container.

Years into adulthood, when the Thanksgiving meal became my domain, that casserole was laid to rest and fresh cranberry sauce replaced canned. The recipe is as easy as opening a can, but tastes so much better: 2 cups cranberries + 1 cup orange juice (not from concentrate) + 1/2 cup sugar, stirred over medium heat until sauce begins to thicken (15 minutes or so). Chill & serve on a lettuce lined platter, an homage to my mother.

A cranberry log atop leaves of lettuce was traditional to more Thanksgiving tables than just ours. When I first saw this 1942 Thanksgiving snapshot, I immediately noticed the log in the glass 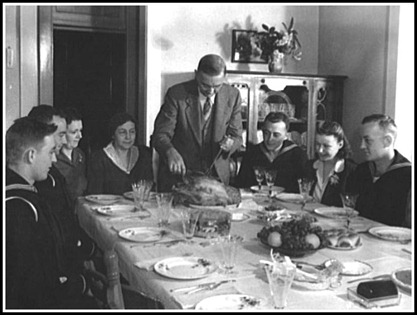 server. I remember laughing because it so reminded me of my mother. Then, I took in the scene: a family with four military-serving sons home on leave for the holiday.

My Dad was also in the Navy. I don’t know where he was Thanksgiving of 1942, but according to this newspaper clipping dated May 20, 1941, he was due home in late June on a ten-day leave. The handwriting on the clipping is his mother’s, my Grandma Birdye. She kept it in an envelope, along with a photo of her sailor boy. Over the next four years, there are more clippings, but none suggest he returned to SC on leave. His discharge card is dated October 8, 1945, and then he shipped home, in time to spend Thanksgiving with his family.

What with the scurrying taking place today and tomorrow by so many traveling home for Thanksgiving, my mind is stuck on the military, and the empty place settings at too many tables in far too many homes.

Before carving the turkey and diving into a heavenly blob of mashed potatoes, it should be law that each and every one of us gives thanks for those in the service, and prays for their homecoming, which is a world of difference from home on leave.

From the entries to National Tie One On Day™, I’ve copied two that are specific to the military. I hope you are as inspired by the writers as I.

I have been participating in NTOOday for a few years. This year will be a bit different as we are exploring ways to help out at Fisher House, the residence available to families of service personnel getting treatment at the Walter Reed National Medical Center. The current conflicts have taken their toll on our dedicated service people, and as many are far from home, we are hoping to add a little levity and personal touch to their celebrations.

I use this time of year to give to select homeless men who are Vietnam Veterans. I lost my husband and son, both of which were veterans, in 2004 within a 2 month time span. Since then around Thanksgiving I have hunted out a homeless veteran and gave him gifts that I would have bought for my husband and my son such a thermal underwear, socks, gloves, hats, etc. I also include some of the goodies they enjoyed like stained glass candy, fudge, cookies, breads, etc. I use this to hone my husband and my son and to keep their memories alive. Thank you for allowing to share with you how I spend Thanksgiving and tie One On Day. 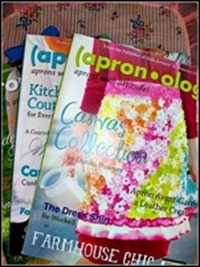 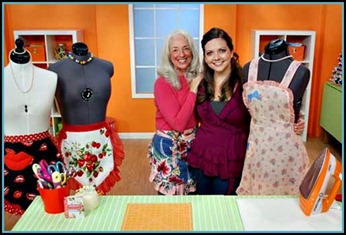 Thank you to all who are spreading the word of National Tie One On Day, for the more who participate, the more who receive.
xxea