As I prepared last night’s dinner, smoke wafted from the oven and created a cloud that literally filled the kitchen. Opening all the windows and the door helped dissipate it in time to prevent the smoke alarm from going off. But the signal was clear – it was time to clean the oven.

The task of cleaning a self-cleaning oven isn’t much of one. Still, I thought it best to read the oven’s manual to be certain of the steps. Before pressing the button CLEAN, there was some cleaning up to do that included scrubbing at the burnt on stuff from the oven’s floor with a non-abrasive product, such as Bon Ami.

Bon Ami? I had no idea it was still available. From my stash of vintage magazines, I discovered this 1933 advertisement 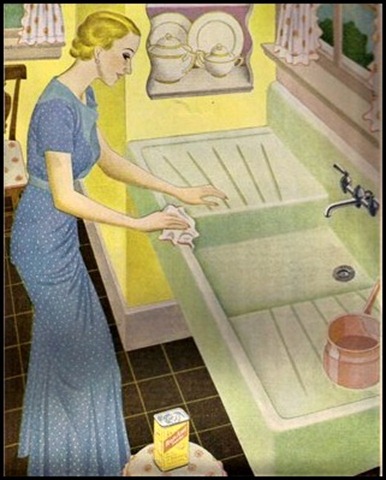 She’s set the Bon Ami can on the fabric covered stool, within easy reach as she confidently cleans the sink without wearing rubber gloves….because Bon Ami “cleans thoroughly, quickly and well—without any injury to the lustrous surface—without any harm to your hands and fingernails!”

More interesting Facts: Bon Ami is French for “Good Friend.” The first Bon Ami soap was manufactured in 1886. It’s sold by the Faultless Starch/Bon Ami Company of Kansas City, MO. The product’s slogan is “Hasn’t scratched yet” and refers to the fact that it does not scratch surfaces. The Bon Ami mascot, a

chick emerging from an egg is a play on the slogan (the newly-hatched chick hasn’t scratched the ground for worms and insects). Fascinating, yes?

If I’d been smart, I’d have heeded the 73-year-old advertisement and made a new Best Friend with Bon Ami. Instead, I scraped at burnt gook –gloveless – with a pad and cleanser that left both my hands and the oven’s floor looking like I’ve been scratching the ground for ….

Ah, well, the oven is clean and it’s been ages since I’ve had a manicure.