Setting a festive table can be the most, or least, enjoyable part of hosting the Thanksgiving gathering.

Some hostesses see the dining table as a blank canvas awaiting heirlooms of Damask, polished silver, sparkling crystal and china, while an expanse of naked tabletop puts others into a tailspin of anxiety.

For the nervous or uninspired, there are magazines galore with step-by-step how to’s, covering every nuance from the under cloth to floral height and placecard placement.

Rarely, however, do these picture-perfect tablescapes include decorations made by children, an overlooked, creative force right under our feet or noses, as the age may be.

Kid-made table accents can infuse a stuffy, too-serious setting with character and charm.

“I made a new table decoration for our Thanksgiving dinner table last year. It was a turkey made with a big red apple, toothpicks, dark raisins, cloves and a stuffed olive. The apple was the body, the tail was fan-shaped, made of tooth­picks covered with small dark raisins pushed down over them. The head was a large stuffed olive with a little of the red stuffing hanging out. Cloves were used for eyes. I made a raisin-covered toothpick neck and three colored tooth­pick legs so he could stand up. My mother liked it and I hope you do too.”

Little Phebe’s concise instructions and clear illustration of the finished project mark this a child-friendly craft.

Envisioning Phebe’s decorations as homey placecard holders for my own table, but lacking a youngster to enlist in the making, I made Phebe’s turkeys myself. 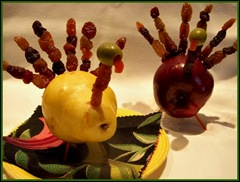 Despite my upscale addition of golden raisins and a pear substitute, these turkeys are real turkeys.

What’s missing is the additive of fun that children bring to a holiday table.

Please continue to spread the word – National Tie One On Day is such a win-win! And register to win one of six sponsor-filled goodie bags.

Tie One On…an apron, of course