Traveling to Albuquerque for the American Sewing Guild’s 2009 convention, the back of the car was layered with dozens of freshly ironed aprons and household cloth goods for my booth and a mini-exhibit to be displayed within the Exhibitor’s Hall. However, parking incovenient to the convention center’s front doors, the aprons and dishtoweling and fabric and hot pads and hankies and all else were less than delicately folded into one large mass by Tote Boy, my normally helpful and happy PC, and hauled several blocks with only one concern – that he reach air conditioning post haste. Alas, the collectibles I’d ironed to crispness summarily melted into wrinkles. Call it a heated moment in the extreme heat that is summer in New Mexico.
Once inside, one of us re-energized with a nappy. 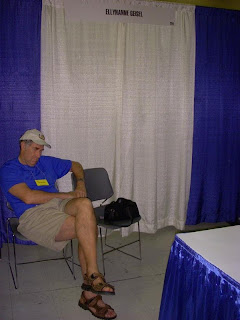 Faced with transforming the booth and six portables all by my lonesome, I fortified first with a Coke; then, with hundreds of push pins, I attempted to create a flow of cloth. Within a half hour, I realized that having a drawn out plan of what went where would have been a huge help. Instead, I raced about rearranging or altogether pulling down what I’d just put into place.
Finally, I just stopped. Whatever was up and however it looked was good enough. Lesson learned. Here is a photo collage of the booth (the center picture) and the six displays.

I thought this collage would be a great way to share the display, but now I’m not so sure. Perhaps I need to post the pictures individually, so they are better viewed.

One delight of returning to ASG’s yearly convention was catching up with the wonderful women I’d met two years ago in Sacramento. And then there is the surprise meeting up, like this fabulous smiley moment with Ellen March, editor in chief of Sew News and Creative Embroidery magazines, and new sponsor of National Tie One On Day! 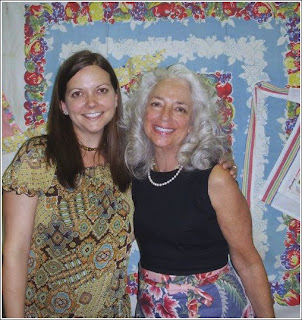 And the winner of my favorite pie book, Humble Pie by Anne Dimmock, is Bonniesline. A new Sunday giveaway is coming up. Only subscribers to the Apron Memories newsletter are eligible, so if you’re reading this and not subscribing… do give it a go!
xxea
Tie One On…an apron, of course!